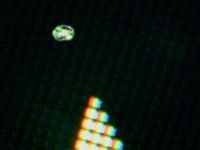 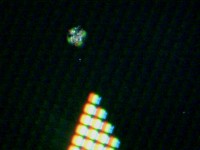 I'm a tech obsessed and self-confessed geek. As the Technical Director at Fivenines UK, I'm lucky that I get to faf with gadgets, design websites and fix servers...

YES. I am on my second display for this exact reason, and third display overall on my early 2013 Retina MacBook Pro. It’s like there is an imperfection that suddenly develops in the coating. I just found another “explosion” spot tonight on the new screen and I am just about at the end of my rope. Here is the transcript from what I posted on macrumors and apple’s support communities:

“I’ve already posted this to MacRumors, but it needs to be posted here on an official Apple forum too, because I am SO angry.

Has anyone else had an issue where the screen coating on their retina display seems to be degrading in spots? To the naked eye, it looks like a minuscule chunk out of the screen, or a dead pixel, but upon closer inspection with the computer turned off, it appears that the coating has developed an imperfection in the finish, which is causing the refraction of light.

I had the screen replaced 5 weeks ago for the same issue, which had appeared in multiple spots. The computer is only 4 months old. Before that, when the computer was three weeks old, a bug crawled out from IN BETWEEN the pixels and the exterior coating and died, warranting the first screen replacement.

This machine is already a replacement machine for an early 2011 MPB which had no end of hard drive problems. It would appear that any Apple product I own which is under an AppleCare warranty is cursed – my 2008 MBP and iPhone 4S are both out of warranty and doing just fine (knock on wood). Granted, AC has covered the repairs in all instances thus far, but really – what is wrong with Apple’s quality control lately? I have never had this many issues with any of their products.

Incensed, I’ve once again crawled through the forums, and this time found a few people with the same issue, as well as some other non related articles taking issue with LG vs Samsung retina displays. Could this be the source of the problem? Perhaps what comes OEM is Samsung and I’ve had two LG displays as replacements?? Apparently there is a third party script that can be ran on the machine to determine which manufacturer made the screen – but would this be accurate after two screen replacements?

I’m seriously considering driving to Tampa to take care of this because I’m utterly embarrassed to have to ask my local service center/reseller to replace the screen on this computer a THIRD time in nearly as many months.”

This thing is a white elephant. </3

Yep…frustrating bit. I just had my screen replaced…Apple replaced my screen free of charge, and guess what…a week later i noticed one on the new screen!

Stuff it…These retina screens are crap. Nice for visual brilliance, but frustrating as hell. I still have 2 months to go on my warranty. ill monitor the situation until the eleventh hour….then decide whether to return it to have it replaced or not.

Otherwize, I will just have to live with this issue. Or, lodge a million complaints to Apple!

I’ve had the same experience as well on two different MBPs at the same time from the 2013 generation (one is work, one is personal). They both developed a pin hole sized crater in the glass and the pixel underneath looked discolored- not sure if the pixel was damaged or it was the crater that caused the discoloration.

Although both covered under the warranty the Mac Genius at the local Apple Store did not want to fix it, he claimed it was due to dirt and so it would not be covered. Of course I complained to the manager and since I was at the time a Joint Venture member they finally agreed to repair both laptops.

Now a year later the same issue has reappeared on both screens that were replaced. Unfortunately the warranty on my personal laptop is expired and Apple only offers me their $310 flat rate repair. I should not have to pay for a screen that was defective from the start. What poor quality for screens to have this defect and suffer from these tiny craters. A search on Google of “macbook pro exploding pixels” come up with several more people who have experienced the same thing among other problems.

If you are listening Apple, these screens are suffering from multiple issues, from craters, to ghosting, to light spots. I would encourage you guys to start an extended repair program as you have done before for the rare instances one of your products were found to be defective.

I have a Macbook Pro 15″ retina that suffers from the exploded pixel issue (approx. 10 affected pixels distributed across the screen). It has an LG LP154WT1-SJA2 display. I am worried that a steadily increasing number of pixels will explode over time. What are your experiences? Does it “stabilize” at some point, or will it most likely get worse? I have searched for info on which displays are most affected, but it seems both Samsung and LG displays can have the problem. Also, the only specific thing I have found that may trigger this is in connection with flights (ie., either the x-ray or pressure differences) but I don’t know if this is true? Thanks for any inputs on this

IÆve never taken mine on a flight, or through an x-ray scanner – so canÆt say that it is part of your pattern. In the end I had my screen replaced – and havenÆt experienced the issue since the replacement.

Thanks for publishing the microscope images. Just for the record, I have just found what appears to be an exploded pixel on my 5 months old Macbook Pro 15″ from 2018. A group of 4 pixels with a green/gray tint and I can feel a crater in the screen with my nail. Have been quite careful and wiped any dust away from the keyboard and trackpad before closing the screen. Seems the problem has not been solved yet. Screen model is LP154WT5-SJA1 (LG).

I have a Macbook Pro 15ŌĆ│ (2018), and I’m having the same issue, a tiny pin hole that is the size of the tip of a needle if not even smaller. Where did you find screen model?

Macbook Pro Early 2013 Retina Display:
I noticed a dead pixel a few weeks ago. Not really a big deal, it was only one pixel. This morning I awoke to find that the screen had what i thought was a piece of feather or something like that and when dusting it off didn’t work, I felt that there was a tiny little bump on the screen. I used a magnifying glass to see that it was like a little volcano, with the dead pixel in the center. My dead pixel had erupted and now I have a tiny pimple on my screen. No fix here. This screen is officially broken and there is no repair option other that full screen replacement. ­¤Öü I can/have to live with it for a while because a repair usually hovers around $350-$650 USD, so eff that. I’ll wait and buy a new laptop when I can. Good luck all that have the volcano dead pixel explosion, it’s been a great Eight Years!! ­¤Öé